Back to where it all began.

Years down the road I will probably look back on last weekend and see it as one of the defining moments in roller derby for me. Ever since I had flunked the last assessment for derby the previous month I was heading down a path I never should have taken. I was so frustrated and disappointed with myself that it built up to the point that the anger started spilling out. I have no doubt I was such a gobshite to be around. I deeply regretted some of my behaviour and knew I needed to change my behaviour quick smart. Once I took a breath and looked at the situation rationally I realised that the longer I continued with derby the more consumed I became with the notion of wanting to finally bout after all these years that I forgot why I joined derby along the way.

I went into training trying to drop some of the intense pressure I put on myself to get to bouting level. I wanted to still work hard and improve but I wanted to enjoy training again too. I pushed myself and worked up a sweat and was happy with how it went. By the end of it Betty as head of the training committee gave me feedback on my assessment on what I passed and didn't pass. It was good to know what I didn't pass, to be honest it was things I suspected I was weak on. I found all the feedback that Betty gave me really helpful and talking with her about the assessment finally allowed me to move on from it and start focussing on the next one especially now that the assessment has been changed.

Roll onto Saturday and it was back to where I really first fell in love with derby - watching a Newy bout. My sister and I made the trek up to Newcastle to watch the Scott Pilgrim themed double header. Both Newy rep teams were in action against pot luck teams made of skaters from around the state. I was wearing Jilla's jacket which I won at the auction last year and I was proud as punch to be wearing it because for me it was the derby equivalent of wearing a Liverpool jersey when I'm watching Liverpool player. If only derby did something like that, I know which player names I'd be getting on the back of the team shirts :)

The opening bout saw the Star Riots and the Sex Bob-ombs take each other on. I was cheering madly for the Star Riots but the Bob-ombs were just way too strong for them across the track, especially Phar Slap who played an amazing bout. The highlight for me was seeing Glitter knock down poor Hazy Demon three times in the one jam with some ridiculously big hits but to Hazy's credit she kept coming back up. The scoreline might have blowed out in the second half but I still loved watching it. It was interesting to see how the new rules affects the gameplay and how teams try to adapt to the changes.

Watching the skaters warm up on the track before the main bout I was once again blown away by Dangerass. I would pay good money just to watch her skate in a non derby environment. I was simply mesmerised by the moves and skills she was pulling off effortlessly. That coupled with her blocking, she is simply a joy to watch on the track.

The battle I was looking forward to the most was between Jilla and Vishious Ness. Two almighty blockers going toe to toe. I kid you not you could feel the vibrations whenever they collided. They both gave as good as they got. I must have swallowed a few flies because my jaw had permanently dropped watching them two in action. It'll go down as some of my all time favourite scenes in derby to date.

It's funny in more recent times I managed to get over my star struck phase with Jill and got to know her well enough off the derby track that I ended up becoming friend's with her. Believe it or not I can actually have a normal conversation with her haha. It's a different story when she has her skates on, I still fangirl as much as I did the first time I ever saw her bout :) She still continues to amaze me with her performances. I have no doubt she'd school me if I ever got to fulfil my dream of bouting against her but how awesome would it be to come up against someone of her ability? I have run out of superlatives to say about her but she did put in another AMAZING performance on Saturday.

The second bout was a lot closer. The evil exes had a handy lead but on no less than 3 occassions Babycakes dragged the Dames back into the contest with some high scoring jams. The Dames eventually took the lead towards the end of the second half and from there they never looked back. Reliving every hit and block on the sidelines and going bat shit crazy on the sidelines cheering on the Dames that I ended up sounding like a tranny by the end of the bout. For me it was another perfect example of why I fell in love with this sport and this particular team in the first place. Overall it was another amazing night. Of course it wouldn't be an NRDL event if I didn't have Tantrum invade my personal space like she always does :)

Just before the Dames bout started I discovered that my league was having a home bout in May so given the fact I'm at the level that I can bout at intraleague level it quite simply meant that I was eligible to bout in this bout. Yes, you read that correctly I AM GOING TO HAVE MY FIRST BOUT. I couldn't get to CAss quick enough to tell her at half time! After nearly 3 1/2 years I couldn't believe it either, I still can't. I feel a mixture of nerves, excitement and disbelief about it all. There is that nagging little thought in my head 'Am I really ready to start bouting?'. I hope I am! I know I will throw everything I have into preparing for the bout. I thought I would have more to say about this news but the truth is I don't know what to think! Maybe as the day gets closer it will get to the point that I won't shut up about it haha. You have been warned!

Literally the cherry on top to this massive derby weekend was catching up with Cherry at Skatel on the Sunday morning just like old times when I was learning to skate before I joined up with HARD. The week before she announced her retirement from derby. I was happy for her because she was doing the right thing for her but I was sad for selfish reasons because it meant I would never get the chance to bout with her. We missed it by one freaking month!!!! At her last bout she gave me the dog tags she won for blocker of the year at our awards night in 2012. That and the reason why she gave them to me made me tear up. 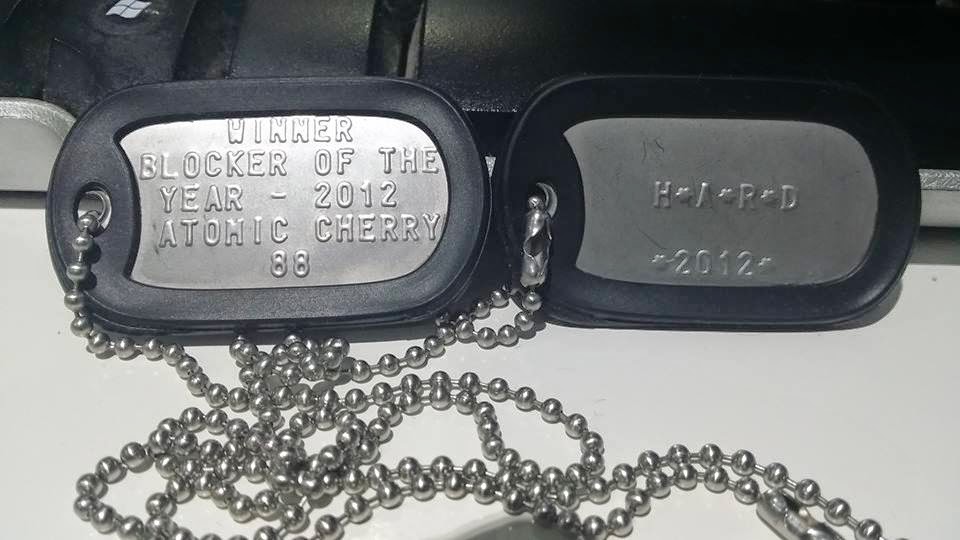 What started as me fangirling whenever I was near her on skates turned into a teacher/student relationship and finally friendship both on and off the track. Here we were back again where we first met up and while we weren't just skating she took the time to give me one on one training just like she always did. When we were working on my crossover form she would record me doing it and then we'd analyse it and she'd show me some things to try to try and fix my form and it was really working. Even when we were working on the blocking stuff it was such a massive help and I really got a lot out of it. I was grinning like a fecking idiot the whole time :D

If this weekend taught me anything it's that sometimes you need to go back to where it all began to be reminded why you started something in the first place because it's easy to get lost along the way like in my case. It really was a great weekend, hopefully it continues!