I went to the SRDL bout on the weekend and this time I dragged both my cousin Mark and his girlfriend Suzie who also happens to be my personal trainer to watch their first ever derby bout. Sadly SAS lost to the D'viants who I also have a soft spot for. Freyda Cox was unbelievably amazing in the first bout. She excelled in any position she was asked to play. It was great to watch. I haven't been to that many SRDL bouts to date due to the fact they always clash with something else I've already got planned but I knew the second bout between BSK and Team Unicorn would be a highly entertaining bout starting with the skate out's. I'm really not fussed about skate out's but maybe because I was just watching the bout instead of taking notes for a write up I must admit the Team Unicorn skate out was pretty damn entertaining! The bout itself was an amazing spectacle too. BSK beat the more fancied Unicorns. Bomb Jones jammed out of her skin and Great Bolz of fire was freaking amazing in the defending department. She kept Winnie Bruise pretty quiet which is no easy feat. Special shout out to Elwyn who was the score guy he managed to out entertain the Unicorns. I would pay the entry fee just to see him do the scores again.

I'm still keeping up with the extra exercise away from derby. A group of us HARDies even have a little exercise group which I'm finding is great support and motivation for me and makes me less likely to come up with excuses for not exercising. I've re-arranged my room so now I've got floor space to do some core work and basic strength work. I'm also lucky in that Suzie has finally gotten to watch a bout because now that she knows what derby entails she can adjust my training sessions to help strengthen my body for the demands of derby. I've got all the resources available to me it's just up to me now to make the most of it and get closer to my bouting dream.

One thing I've noticed especially when I've struggled with my fitness levels after coming back injury is that my drive to want to do derby is still alive and well, I think it's actually gotten stronger since I first started last year. I know when I eventually start bouting initially I'll be spending more time on my arse than on my skates coming up against more experienced skaters but I know I'll be able to get back up again and keep going back for more because if anything all the setbacks I've had have actually toughened me up a bit mentally and that I know I've got it in me to carry on fighting. So my fellow HARDies while I might not become a superstar skater I promise you I'll give it my all right up until the final whistle even if I have to crawl on the track because I'm feeling completely fucked (which is probably a sign I need to work on my endurance hehe).

Following on with some advice I got about putting my passion and aggression for derby into more productive means. I've been focussing on rules and strategies in my spare time. For all the complaints about anti-derby we use the same rule book so instead of complaining why not try to come up with ways of counteracting the anti-derby plays? For all the rule controversies it also provides a chance for someone to come up with new plays which I think is a good thing for the sport as it allows the sport to grow and evolve. Having come from a soccer background I can see the similarities with having to work as a team and become one unit. With different formations, use of wingers etc in soccer it has made me look at derby differently and think of plays that could be used like how to counteract someone backwards blocking at the front of the pack. I think I've worked out how to stop it and it works in theory I guess it just depends on whether it would work on the track.

I got inspired by both our Team Zebra and the white board we sometimes use at training to work on plays to come up with my own. I wanted to make it a little fun so armed with my e-bay account and Posca markers I made up some modified H*A*R*D and NRDL skaters hehe. It does make it a bit easier to picture plays in your head because they sort of look like skaters. Even in lego form H*A*R*D vs NRDL looks pretty damn good don't you think? Imagine how much awesome it would look in real life hehe. One guess who the Newy skater is skating backwards at the front of the pack! 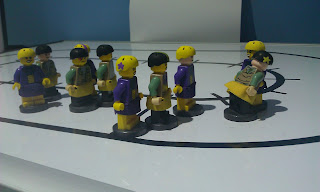 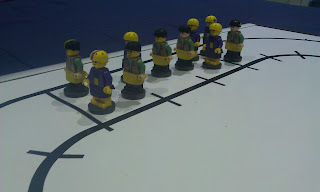