Some leagues are already back at training, my league is back to training next week. Another year full of hopes, dreams and anticipation. I won't lie I did enjoy the break but now I'm looking forward to getting back into derby training. During the break I put together a list of goals I'm striving to achieve this year. I haven't put dates next to each goal because I have to bear in mind my knees and ankles and the fact that they can go at any moment so it's more of a list of things I'd love to achieve this year. Here's my list: 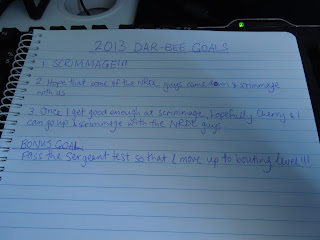 There probably isn't too many surprises in there but they're my goals I'd love to achieve this year, plus it gives me something to work towards.

I had my first skate for the year last Saturday when I went up to the Newy social skate. I hit the ground running with no hesitance, it was like I hadn't stopped skating which was a welcome relief instead of being filled with nerves when I get back on skates after a long period of being off skates. It was good catching up with some friend's who I hadn't seen in a while. I had a discussion with some of them on how you would try and stop certain skaters on the track like Jilla. I got told what to do and what NOT to do but it's a whole different thing trying to implement it on the track!

I worked on my form, backwards skating and transitions and I was pretty happy with how I went. Lightning Strike'her was up there skating too and while we were chatting we got onto blocking practise. I told her my technique was bad and now that I was about to start scrimmaging I was hoping to fix it up. She kindly offered to let me block her. She was a great help and both her and Cass pointed out what I needed to work on. My problem is I've been able to use my body to hold my ground against people who are about my level. Instead of getting my foot in front of them I tend to stand side by side and push them out of the way. Problem is when I come up against someone like Cherry's level she gets the best of me everytime if I don't get my foot in front of her when I'm trying to block her. Another thing I go in with my head when I lay a block on, I might not make contact with them but still it's bad form and I'm more than likely going to get pulled up for blocking with the head. My blocking technique is something I really need to work on.

My knee has done its best rice bubbles impersonation of snap,crackle and pop. I can't take a knee and if I try and squat or go for a run I get really bad shooting pains running through it. I've strapped it to the shithouse, it's helped a bit in that it's restricted my movement a little so it's not hurting as much. After having my first proper derby preseason this wasn't how I was hoping to start my derby year. Instead of looking forward to training next week I'll more than likely be heading back to the physio's table. Sure it's easy to go offf and cry about it but at the end of the day this is the situation I find myself in. I don't think I've ever fought as hard for anything as I have to realise this derby dream of mine. I suppose bouting with my team mates and taking on the likes of NRDL might not be a big deal in the grand scheme of things but I want to do this so even if I have to get on the track with crutches that's what I'll do.
Posted by Sylv K at 6:25 PM