I kid you not I was on such a post derby training high for days after derby training the previous week that I could not remember the last time I felt so happy. Terribly cliqued I know but it's true :) My knee, however, thought it was too much derby awesomeness so I was in a world of pain throughout the week that I seriously thought I wouldn't be able to train. My hopes of training were literally being held together by strapping tape. Thankfully it calmed down enough by Friday night that I grabbed my gear and went to training.

Having been a fan of the intensity and focus that NRDL drills into their skaters when they turn up for training, I decided that I wanted to continue that trend with my own training back at HARD. Friday night provided the perfect opportunity to test it out as the training was geared towards the skaters who were being tested to move up to the next level. When they were getting tested on certain skills the rest of us would have to get off the track, so instead of sitting down and waiting until we could get back on the track I would go over to the empty court and start practising things I learnt from the Newy training session.

Matron ran the training session so aside from the few skaters being tested, the focus was on leg and core strengthening. I actually found that part pretty easy which is thanks to the gruelling PT sessions I have with my trainer Suzie (cheers if you're reading this Suzie!). I had bit of a win that night. One drill we had to do was for everyone to skate in one big pack for five minutes straight. For those who read my blog last year you'll know that I always stayed at the back of the pack when we did these sort of drills, too scared to engage because I was worried I'd fall and get injured. Yeah well not this time, I was pretty much close to or at the front for the majority of the drill right in the the thick of the action!! Around bends I was even guiding some of my team mates.

A couple of my team mates said I was training more confidently after having trained with NRDL the previous Sunday which was a nice compliment. I felt like I was skating more freely and wasn't holding back like I usually do.

On Saturday night it was HARD's second birthday bash/awards night. It was such a great night out, being able to just sit down and socialise casually with your team mates in a way that you can't do at training. I was made up for Posh Deck'em who got HARDie of the year along with a whole stack of other awards. It's the least she deserves after everything she's done on and off the track. As for me, one of the few good things to come out of being injured so often last year was that my team mates voted me as NSO of the year for the second year in a row due to my jam timing duties when they scrimmaged last year! That was an honour :) 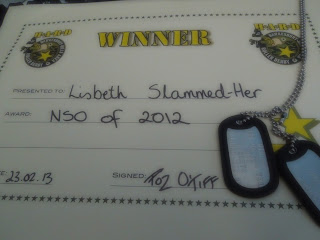 Sunday arvo meant one final training session with NRDL woohoo! There was a quick rehash on what we learnt the previous week and we built on from there with shoulder blocks and can openers (it still makes me giggle when I say 'we' I'm not even a member of NRDL hehe). One of my favourite drills over the two weeks was funnily enough practising the latitude skating and blocks. I've got the turning circle of a truck so when we started practising those sharp latitude turns between cones I really did suck, there's no other way to put it. I practised back at HARD and when I went outdoor skating and I was starting to notice some improvements which made me happy. The only downside was that the strained medial ligament in my right knee didn't like it so much when I attempted to turn or carve right so the pain I was getting somewhat restricted me but I didn't let that stop me from giving it my all at the training session.

One of the great things about the training sessions with NRDL was the different levels of skaters I was training with. They ranged from tenderisers to intraleague bouting skaters to Dockyard Dames. I got to practise blocking with Marilyn Tantrum who I think is a tenderiser, holy crap she's going to become an awesome blocker who people will actively avoid on the track. She really packs some power with her blocking. I'm twice the size of ChamPain Showers but she can more than hold her own and she's awkward to block so that was good practise for me. It might have only been for one lap but one of my favourite skaters I came up against was Deathrow Doll. I've seen her in a few NRDL bouts. She's a no holding back, annihilator of a blocker. This could be fun :) We met when her and another blocker took turns blocking me around the track. First attempt they blocked me simulatenously and the force brought me to my knees. in the subsequent blocks Deathrow Doll didn't let up one bit which I loved. I had much respect for her. I can't wait to come up against her again one day and try and return the favour ;)

Next up we had a paceline going. The person at the back of the line had to make their way to the front but they had to pick any 5 skaters to block on their way through. I tried picking different types of skaters on my way through but my two main targets were Cass and Jilla :) First time ever I blocked Jilla, I was grinning the while time :) Take a guess which two skaters lined me up on their way through the paceline hehe. I have difficulty coming up against skaters like Cass mainly because of the height difference. By the time I try and get down they've blocked me and moved on. I find someone like Jilla easier to try and block since we're a similar height. She blocks from left to right, whereas I'm the opposite I block from right to left. When she blocked me I stood my ground but I'm not sure if she stumbled slightly after she blocked me I was too busy celebrating that I was still on my skates hehe. License to Kell who was skating behind said it was the highlight of the night for me haha.

When it came to my turn again I picked out Cass again so I tried getting lower than last time but I stuffed up my attempt, somehow twisted during the block, stacked it and winded myself. It's the first time in my life I've been winded so I was momentarily stunned and unsure what to do. I couldn't catch my breath and it hurt to breathe. Not thinking I kept skating and tried to catch up again to the paceline. Guess who was towards the end of the line? Attempting to block Jilla on your weak side while winded was an experience! I did the twisting thing again when I blocked her, so she corrected me and told me to try blocking her again, which I did and it was a better attempt but I felt like dying by that stage hehe. I finally did the smart thing and sat out the next drill to try and get my breathing back to normal.

The past two weeks have been absolute game changers for me. What initially started off as ironing out my blocking bugs and learning from someone like Jilla quickly turned into something more. It forced me to address all the fears I've carried since I first put on a pair of quad skates. Since it was only a temporary arrangement there was no time to muck around, I had to get as much as I could out of the sessions. I was training with skaters I had never come up against so it was adapt quickly or keep picking yourself up off of the floor. I was out of my comfort zone the entire time and it was here that I learnt the most. I stacked it more times in those two weeks than I did all of last year but it was from giving it my all and not leaving anything in the tank. I'm actually glad this opportunity to train with NRDL came before I started to scrimmage with HARD because coming up against skaters like Jilla, Danger, Naypalm etc and for the most part handling myself ok makes the thought of scrimmaging that less daunting. I'm certainly not a world beater after two weeks and there's still things I haven't fixed yet that need a lot of work.

Overall the biggest things I got out of it were confidence and belief, two things I've never had in derby. The constant stop/start and injuries got me into a rut that I was having trouble getting out of the last couple of years. These training sessions have blown everything wide open, now I've got a solid foundation to work on and look forward instead of constantly looking backwards. It's made me think why limit myself to just wanting to bout intraleague this year, why not aim for trying to get on our rep team The Camokazis by the end of the year? Sure it probably might not happen but best case scenario it happens, worst case scenario I don't make it but I gave it a crack and I'd still be one step closer to that goal than I was yesterday. Speaking of Camokazis, HARD and NRDL what do you think about a Camokazi vs Star Riots or Smashleys bout at the end of the year ;) Thanks again NRDL for everything and special thanks to Jilla who was a good sport and allowed me to do some extra blocking with her.

It's been well documented that my love affair with NRDL began well before I joined up with HARD but it doesn't mean I love my own league any less, far from it. I do care what happens with us. Nothing would please me more than to represent HARD at intraleague and interleague levels. In the past week I had two opportunities come up to be more involved with my league. I got offered one of the general members positions on our executive board and expressions of interest for the co-benchie role for the Camokazis. I accepted the general members position and I sent in my expression of interest for the co-benchie position. Now it's just a waiting game to see who gets the co-benchie role. Throw in my writing duties for Roller Derby AU and it's going to be another crazy year and that doesn't even include the skating side for derby!
Posted by Sylv K at 5:37 AM