There's stuffing up and then there's completely fucking things up.

From as far back as I can remember I've always had two expectations of myself whenever it came to my involvement in team sports:

Sport has been a huge part of my life that I often suffer the sporting equivalent of bi-polar ranging from the highest of highs to the lowest of lows. The lessons I learnt from all the years I played football (or soccer for Jilla) shaped the way I am in derby. I've never strived to be a superstar but I tried to be the best I could be for the team.

There's two moments from those days which made what happened last Saturday night hit me that much harder. When I was playing in the under 16's all season we were neck and neck with another team. We played each other in the preliminary finals with the scores tied 1-1 and time almost up. I trapped the ball right near our goal line instead of smashing it up field. The opposition striker slid and kicked the ball out from under my foot to score the winner which meant we were forced into an elimination match the following week to have any hope of getting into the grand final. I got home and absolutely bawled my eyes out because it was my fuck up that cost us the match. My poor dad clearly uncomfortable with crying daughters tried his best to cheer me up by reassuring me we'd beat them in the grand final when it mattered :)

Fast forward two weeks and we found ourselves in the grand final against our arch enemies in another nail biter. Just like the rest of the season we played awesome as a team with everyone playing their roles to perfection and we ended up reversing the result and beating them 2-1. It was one of the best moments in my life. What we achieved as a team that season was nothing short of amazing, it's why I treasure the trophy I received at our awards night so dearly even to this day. It serves as a reminder of what can be achieved through hard work and team work. 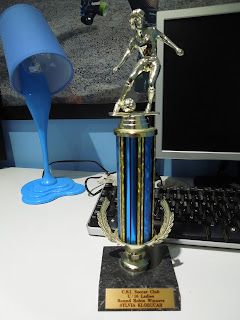 Last Saturday I was line up manager for the first time for the 'kazi's. I wasn't nervous about the task but I was worried about letting down the team with my inexperience. We prepared as a group for the bout in terms of line up's and having a zen bench. By all accounts we started off well, I was following the line up lists and setting the sides out but then I lost track of which side went out next and amongst the confusion it went downhill really quick and that's no exaggeration. The guys were confused so they couldn't plan on what to do on the track which probably lead to the penalties coming up in bucketloads. It was such a massive clusterfuck and I felt like the biggest gobshite in the world by the end of the bout. So much for keeping a zen bench, I lost control and ended up doing the one thing I dreaded the most - I let the team down. Driving home I was trying to think how could I even begin to make it up to the team but drew a complete blank.

In the days after I thought that quitting benching would probably be the right thing to do because clearly I'm rubbish at it. If there's no other option I might have to do line up manager again for the next 5x5 bout against Inner West. A part of me does want to try and fix up last week's fuck up, I owe my team mates that much. I'm not looking for sympathy with this post, in fact I won't hear it (yes I'm looking at you Jac). I put my hand up, I fucked up last Saturday and for that I truly apologise 'kazi's.
Posted by Sylv K at 10:15 PM