The year of smashing derby goals.

Pre-season. In years gone by I've made all these grand plans of skating, working on my weaknesses etc so that I'd be full steam ahead at the first training session for the year. The reality was I'd go to one or two sessions at Skatel and spend the rest of the off season on my arse watching DVD's and then of course struggle with my lack of fitness when the new season kicked off. I knew that wasn't going to cut it this year so I had to change my approach. Not only did my pre-season start before training finished for the year last year it also came at one of my lowest points in derby.

Last month as derby training was slowly starting to wind down for the year it finally confirmed that I wouldn't be bouting which meant I wouldn't fulfil the one derby goal I was desperate to finally achieve last year. Those two knee injuries aside I had thrown everything I had into the year to try and achieve that goal and still fell short of achieving the chance to bout. I felt completely empty and didn't have anything left in the tank to pick myself up and keep going with derby. I had allowed myself to be consumed by the goal of bouting that I had burnt myself out that the only viable option was to be a piker and walk away from derby. I really wasn't as strong a fighter as some people thought I was.

This is where my derby story would have ended if something unexpected didn't happen. For most of my life I've pretty much internalised everything. I don't want to be a whinging, pain in the arse offloading my problems to everyone even though I have no issue if someone came to me with their problems. I'd always try to help someone out. This time I actually voiced my frustrations to two friends who have become more than just derby friends to me. They got me to see common sense in regards to my derby situation but the thing that got me the most was that they actually had belief in me. I wasn't used to that because usually I'm quite cynical and would dismiss it but I trust these two to be honest with me. If others had belief in me why couldn't I see it in myself? I did a whole lot of soul searching only to realise that I had to stop being a dickhead and make myself see I belonged in derby no matter how shit I was or how SLOOOOOOOW my progression was.

Once I was back on track with derby I knew that I had to have a proper pre-season plan because without structure my pre-season would be wasted with excuses just like in previous years. First thing I drew up a list of all my derby goals for 2014 which looked something like this: 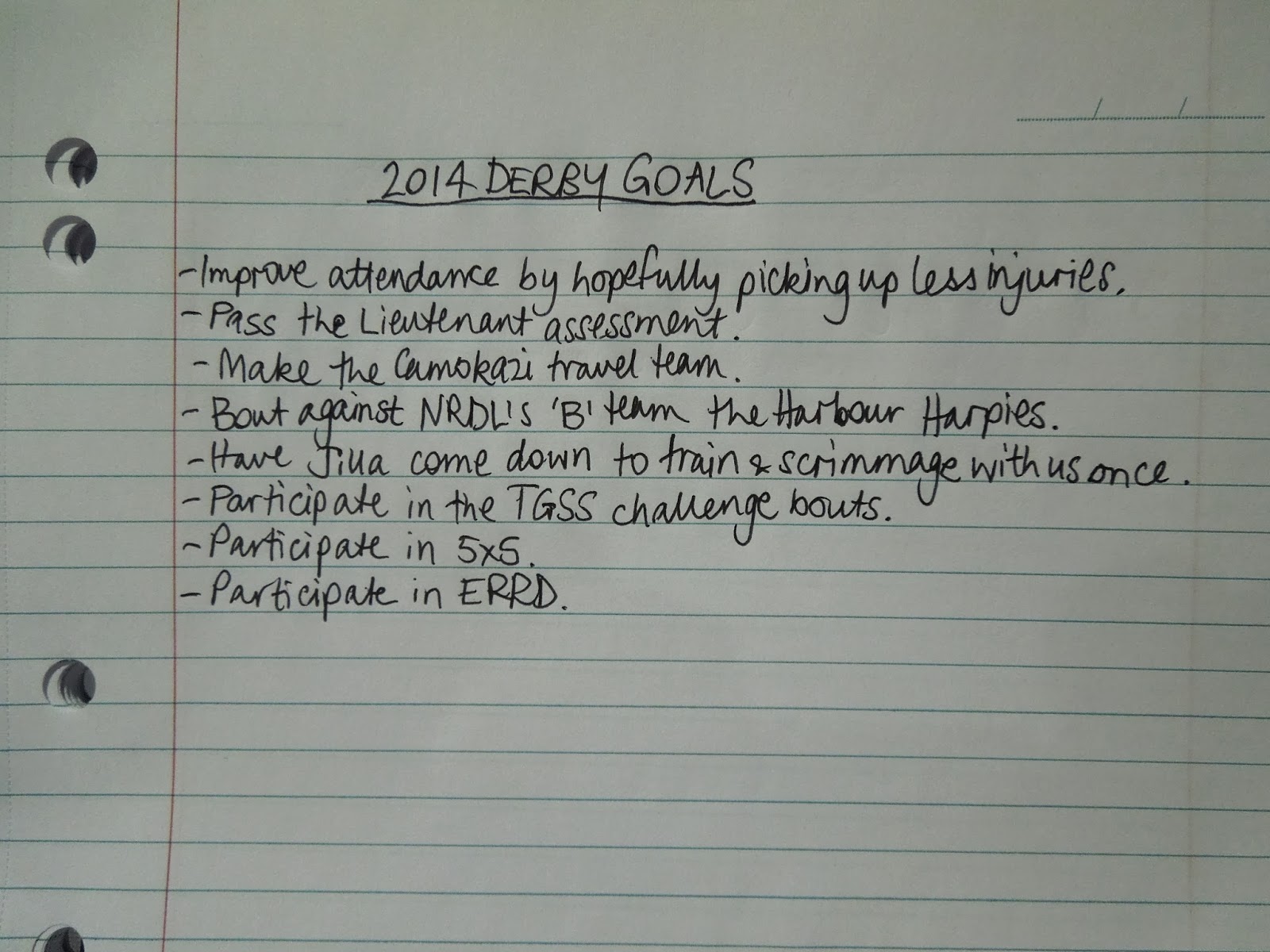 A couple of them were carried over from last year's list since I didn't achieve them, mainly the bouting and Jilla ones. I know I harp on a lot about Jilla in this blog but this training and scrimmage wish has nothing to do with my fangirling. Having had the chance to be trained by her a couple of times last year and having the chance to scrimmage against her I got so much out of it. I would love for my league to get the chance to experience that too.

Since most of my goals are bouting related it quickly became obvious that the key to achieving most of these goals was passing my final level for derby the Lieutenant assessment. Although I can bout in home teams being at Sergeant level we don't have home teams yet so really my best chance of bouting was passing the assessment and then fighting for a spot on the travel team. With that in mind I decided to tackle the assessment piece by piece. I got a copy of the assessment criteria and then broke it down into each criteria and wrote down what I needed to do to pass each criteria so that way I could plan out my pre-season and hit the ground running when derby training resumes on the 2nd February.


I knew that skating, studying rules and analysing NRDL bout footage wasn't going to be enough so I started looking outside of derby to help make me a better skater. I started doing crossfit last month. I post the worst results in each class and I'm the only fat kid in the class while everyone else is super fit but I've learnt to not care because in the one month I've done it I've already noticed improvements in what I can do and my overall fitness. Crossfit is super tough and I feel completely fucked after each class but I know it's going to help me in derby especially with not quitting and lasting until the very end. I've also started running by using the couch to 5k podcasts. I love running and I'm sure all this extra cardio will help with the endurance part of my assessment. I have been feeling inspired by all this non-derby training especially while I am running that I picture myself like Sylvester Stallone in the Rocky movies when the reality is I look more like Eddie in Absolutely Fabulous :) 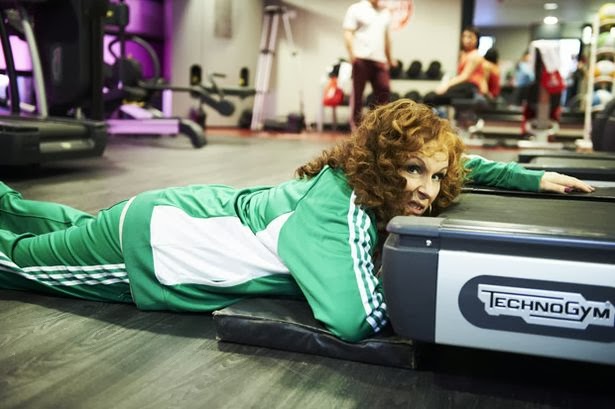 It hasn't been all work and no play in this off season. In between all the exercising and studying I've been filling my time with some great motivational movies (I'm a complete sucker for motivational movies). I've been rewatching all the Rocky movies. My favourite scenes are the ones where he's training for his big fight at the end of each movie. I even downloaded some of the songs from the movies off itunes to put on my ipod to listen to while I exercise. I've even incorporated some boxing drills like skipping and movements to help me with my derby fitness.

The longer this pre-season has gone on and the more exercise I do I've been to realise that I've caught the exercise bug. I seriously can't get enough of exercising! I was up in Newcastle for a few days before I had to go back to work and while I was up there I even joined some of the NRDL folk at the gym for a few days. Each session was challenging but what made me happy was that I coped with each session pretty comfortably. I knew I was heading in the right direction with my pre-season.

The thing that has pleased me the most is my exercise regime has gotten longer and harder with each week but my knee has coped with it all pretty well so far. I'm hoping for more of the same for the rest of the year and that this song won't be my theme song for derby anymore :)

Another thing that has kept me on my toes is reading all the other derby folk posting on Facebook about their pre-season. So many people out there are working hard preparing for the new season so the last thing I want to do is drop the ball with my fitness.

If you want to be the best skater you can be then learning from the best in the business will surely help. I've asked three skaters if they could help me out throughout the year by working with me one on one on various skills I want to improve on. Cherry has already been helping me out at Skatel on things like more effective blocking, crab skating etc. Jilla said she do some sessions with me whenever the NRDL social skates start up again. Lastly I asked Dangerass from NRDL if she could teach me the amazing arse blocking that she does and she said yes :) Right now I'm only really good at counter blocking. I love to learn and improve so getting the chance to work with these three is an amazing opportunity. How lucky am I!

Will I finally get to bout this year? I fucking hope so! This month will be three year's since I started derby. I'm throwing everything I have into hoping that it finally happens this year. I'm pretty happy with the work I've put into my pre-season so far. It has easily been the most productive one I've had to date. I hope everyone else's pre-season is going well :)
Posted by Sylv K at 7:23 PM