The last few weeks at derby have been more frustration and anger than fun and enjoyment with injuries and negativity getting the better of me. At one stage I was thinking of suggesting to the H.A.R.D board a fundraising idea of letting people places bets on which body part I would injure next at training. We could have probably raised enough funds to buy our own training venue :P Amongst all the bad stuff something amazing happened. I was getting encouraging messages from some of the guys and girls at H.A.R.D after my last blog post which I found to be really helpful especially when I started psyching myself out again on Friday arvo, re-reading them again calmed me down. This is my league, it feels like a family to me. I'd (attempt to) run through brick walls if I had to for them.

I unveiled my new ankle guards at training on Friday night. They provided a lot of support to my ankles and I found the more I skated and trained the more confident I became. I believe the ankle guards had a lot to do with that. Us freshies were trained by Scott for the night. He's a speed skater so the knowledge he passed onto us was absolutely brilliant, I picked up a few new things from him. While we were training the more advanced guys were doing hitting practise with Mick holding up a pad. I was stealing glances from time to time, it looked really cool what they were doing. Instead of getting annoyed that I wasn't at that level I used it as something to aspire to and headed back to the freshie training. It got better, I made it through the entire training without getting injured or stacking it YAY! I couldn't stop grinning after training I was just so happy and relieved that my jaws started hurting :D The title for this week's post was my response to my mind after it got the better of me the last few weeks.

After training a few of us went to Macca's to put back on what we just burnt off at training. I ended up learning a lot more derby stuff while we were in the car park. Cherry and Mon were teaching me how to do shoulder hits and hip checks. I struggled with the shoulder hits at first but I improved the more I did. Mon got me with a cheap shot when I wasn't paying attention. I learnt a valuable lesson - always be on your guard around these crazy bitches :P I also learnt that you don't need brute strength to do an effective hit, you can have just as an effective hit if you hit them in the right spot with less power. I was also given exercises to do which will help me eventually do those frigging crossovers. Have you ever done something where you know you'll pay dearly for it but it's worth all the grief? I had such a moment when were leaving. Mick suggested I give Cherry a shoulder hit as a goodbye. I crept up on her and got her with a shoulder hit, she may not have stacked it but she definitely went sideways. Given the look on her face when she turned around I honestly thought she was going to smash me haha. She did promise revenge at skating the next morning *cue end of the world music* :)

At Skatel the next morning I skated without any dramas and at times I managed to skate with a bit more speed than I usually would skate at so that's progress. I did have Cherry's revenge hanging over my head. I'd often have a look where she was when she was skating behind me. She did threaten to hip check me over the short wall, I went to see if it was plausible and it was low enough that she could do it if she wanted to. While we were trash talking each other she somehow stacked it in front of me. I politely suggested that maybe she stacked it because psychologically I got under her skin when I got her with the shoulder hit the night before, that got a good response out of her haha. There were a few times where she'd nudge me slightly or cut in front of me and I loved it. I enjoy the whole cat and mouse act, it keeps me on my toes and allows me to brace myself for the incoming hit which will serve me well when I eventually start scrimmaging. I'm smart enough to know that if she really did hit me I'd be roadkill on the track but stupid me would get up and go for another round because it would bring out my competitive streak.

On Saturday night SRDL had a double header bout with all of the teams from their league competing. While some people enjoy seeing the big hits in derby and who doesn't, I get a big kick out of seeing tactics unfold on the track (blame it on being a Liverpool supporter for over 22 years). I learnt a few more rules that night but I still don't know how all five D'viants managed to get sent off in the same jam within seconds of each other, it completely changed the outcome of the bout. It's funny there were times when I was watching the bout and I was thinking I can't wait until I'm out there bouting but there were other times where I thought how the hell am I going to get up to that level?

Training on Sunday was interesting, we had off skate training for the first hour with Mick taking charge. Maybe I'm a sadist but I enjoyed it, I was happy with the amount of push up's I did but I wasn't happy with my score for the running drill but at least I can work on it. Since I hadn't skated on the new surface yet my nerves once again got the better of me. If felt like my skates were glued to the floor I seriously couldn't move. Both Jodey and Mick were great support and they eventually got me going. It took me a while to get the hang of the floor so there were heaps of things I missed out on doing as I stuck to doing single knee falls and snow plough's only, I will work my way up eventually (I hope)!

After training Mon asked me to be her derby wife. It was completely out of the blue, I always thought I'd end up as a spinster in derby just like in real life :) Mon and I are good friends both on and off the track so of course I said yes. If she got injured (knock on wood she doesn't) on the track I'd be one of the first ones there derby wife or not. We won't be doing the whole wedding/exchanging vows as it feels a bit over the top but we'll still have our friendship, that won't change.

I've decided that when I pass Lieutenant/yellow star (whatever year or decade that may be) I'm going to celebrate by inflicting pain on myself and getting a tattoo to mark the occasion. Since my derby name is based on the kick arse Lisbeth Salander I've decided to get the tattoo on her back and get it done on my right calf, I thought it would tie in well with it all. Here's a pic of what I'm planning on getting - 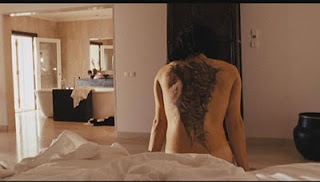 Lastly I wanted to say congratulations to all the WSR freshies I had started off with when I was at WSR on passing their white star tests. Well done, it won't be long until I'll be watching you guys bout.
Posted by Sylv K at 11:07 PM