Starting the year with a bang.

I hope you've all had a good Christmas and New Year! Has anyone had any derby withdrawl symptoms or have you been getting your skate on with some street skating? I know some people have New Year resolutions but I've never kept one in my entire life so I've instead come up with a list of goals I want to try and achieve this year with derby.

1. Learn to walk and then run on my toe stops.
2. Learn how to do the transition move.
3. Scrimmage.
4. Bout by my birthday in October.
5. Hopefully not to suck too much at being an assistant benchie for the first time in my life.

In my last post I was pretty shitty and frustrated with derby and my lack of progress. Thankfully my annual trip with Chris came up in time as we headed out of Sydney and to our usual destination for a few days. Even better he's a qualified psychologist so I got to vent to him the poor bastard haha. I got it all out of my system and ended up doing a bit of off skate training by hitting the beach to try and get my fitness levels up before derby training resumes this Friday. Back at home I've been getting a good work out at the park by this tank as he takes me for a walk and run :)

I finally got to skate today as I headed over to Skatel and it was completely empty for most of the session so I got to even skate in the 'wrong' direction to break it up a bit. I've got the hang of my new skates now it feels like I've been skating on them for ages, I just to have work on the blisters I'm getting with these new boots. The plates are SO responsive. I've got the reactor plates, yeah they might have cost extra but it's proving to be an excellent investment so far. I was working on weaving and the turning circle is so much more smaller than my other plates. This is what my new Liverpool inspired skates look like 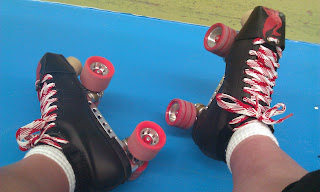 When I go to Skatel I go fully geared except for a mouth guard, I may look like a dork especially since none of the little kids wear any safety gear but this time it proved to be a blessing. I was practising can openers and imagining I was doing them on Cherry when on one of my attempts I leaned too far back and ended up parallel to the floor and landed on my back and hit the back of my head on the concrete floor. My lower back and the back of my head are still hurting so it could have been worse if I wasn't wearing a helmet. I know that this year the training will intensify and I'm going to attempt to learn new skills so there will more than likely be plenty of falls along the way but I didn't even last 2 days into the new year without getting hurt so much for hoping to minimise injuries this year! I accept that I'll be in a world of hurt this year after all this is roller derby and in this world you can't let fear get the better of you so I attempted another can opener in the same spot that I stacked it and did it stack free this time :)

I have a plan. This year I turn 30. I'm one of those people who really couldn't care less about my age because to me it's just a number, it doesn't mean I won't use it as an excuse to do something I really want to do though! I'm thinking of going overseas to Liverpool for a few weeks!! I'd happily miss out on having a 30th birthday party but it would also mean having to miss out on going to the Great Southern Slam and Rollercon which will suck because they're two big roller derby events happening in Australia this year that I wanted to go to. Of course it all comes down to whether or not I can save enough money in time and get the time off work. I would love to catch up with some of my friend's again, watch another Liverpool match and spend time in a city that I consider 'home'. This time though it would have the added advantage of roller derby. If I do go I'd love to have a training session with either or all of the Liverpool Roller Birds, Preston Roller Girls, Wirral Whipiteres Roller Derby leagues. How awesome would that be! It also serves as extra motivation for training so that I'd be at a decent level before I trained with another league.

So derby training resumes this week for us. I won't lie there's a bit of nerves because I know it's going to be a lot more harder this year if I want to make the step up to scrimmaging and bouting. I've discovered a bit of mental strength the last couple of months to continue pushing on even when it sucks and thoughts of quitting run through my head (one of the unfortunate symptoms of being a bottler all my adult life) so hopefully that'll help me the next few months.
Posted by Sylv K at 7:31 PM